Henry Robertson Bowers (1883 – 1912) Adventurer. Short, hardy, reliable, understated and the finest example of a man Greenock has ever produced. He sailed at least five times around the world. He was a Royal Indian Marine and he captured gun runners on the Persian Gulf. 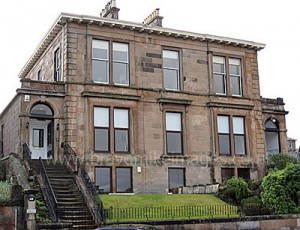 Henry was born in the house at the corner of the Esplanade and North St. A small plaque on the wall tells you this. He moved to England with his mother and sisters after his father died in 1887. His mother returned to Rothesay when he was in his early twenties. He would swim from Ardbeg Point to Craigmore Pier and back in the dark of a winter’s morning. 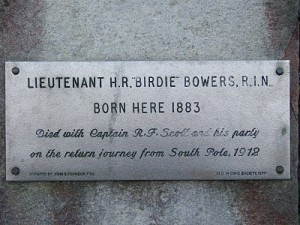 He travelled to Antarctica with Scott on the Terra Nova. He was stranded with horses on ice floes. Read Cherry- Garrard’s Winter Journey. Read how they lose their tent and feel the tears in your eyes when they somehow manage to find it. He became the ‘fifth man’ in the race to the Pole. He died with Scott,Wilson and the others.  He lies with them in the ice.

There is a memorial plaque to him in St Ninian’s Church on Bute. His name is also on the family plot in Greenock Cemetery. 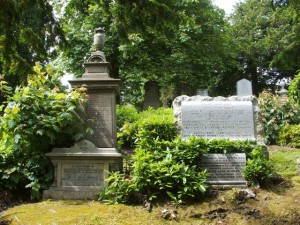 During October 2012 various events took place in Inverclyde to mark the centenary of the deaths in the Antarctic.  A wreath laying ceremony took place the family grave.  Birdie’s nearest living relative, John Ramwell, spoke very movingly about his relative on the day.

One hundred years ago the Heroic Age of Polar Exploration was coming to a close. Today we have the wonders of technology which make travelling to places like the Polar Regions not only possible but also comfortable. It was not that many years ago when such travel was only for the tough and determined. We need to remind ourselves just how tough polar exploration was back then; back before the modern light-weight materials, before light weight and nutritious rations, advances in communication and travel. We take so much for granted today but think just how it might feel to be exploring the planet Mars, taking those first few steps for human kind. In a few years time we may well see a return to a ‘Heroic Age of Travel’. Meanwhile let us cast our minds back to the Heroic Age of Polar travel.

Many played leading roles and became the celebrities of their day as well as going down in history.

Some went searching for fame and glory; others simply found themselves the subject of such by being in the right place at the right time. Into this latter category came Lt. Henry Robertson ‘Birdie’ Bowers, native of this town.

He did not go searching for fame. He wanted to explore and discover the world. The fact that we all stand here today in his memory is due to what he was; to his character, his enthusiasm and his enduring optimism and conviviality.

Born on the 29th July, 1883 just down the road from where we are, ‘Birdie’ Bowers was absorbed by accounts of polar exploration. He found his chance to join Capt. Robert Falcon Scott’s second expedition, the Terra Nova Expedition, to the South in 1910 having been recommended by Sir Clements Markham, President of the Royal Geographical Society.

Apparently Capt. Scott was not too enamored with ‘Birdie’ on their initial meeting.  This attitude soon changed as Capt. Scott went on to find Lt. Bowers indispensable; so much so that at the last moment he insisted he accompany him and his team on the final leg of the South Pole journey.

On the 29th March, 1912, one hundred years ago this year, Capt. Scott, with Dr. Edward Wilson, Henry Bowers, Lawrence Oates and Edgar Evans died on their return from the South Pole. The actual anniversary was commemorated at St. Paul’s Cathedral, London where I again had the privilege to lay a wreath on behalf of the Nation and his family.

This privilege has come around a second time and I am proud to have the opportunity.

I only wish that I could talk to you about ‘Birdie’ Bowers from my own experience. I wish I had known him; I wish I had met him. The more I read about his life and times, as short as they were, spanning 29 years, the more I would have liked to have shared time with him.

Of course this is not to be and I must take the words of others to compile this eulogy. It is the case that who and where ever you source information there is always unanimous opinions about ‘Birdie’ Bowers. There is never a word of caution or aspersion about him.

Sara Wheeler in her book, ‘Cherry, A Life of Apsley Cherry-Garrard’, says,

“The lower ranks adored Bowers. He was a good tempered, hard-working officer and a cheery optimist who exuded warm good sense: as one of his sisters said, ‘There wasn’t a twist in him’. He was devoid of intellectual pretension or aspiration. He simply marched resolutely through life getting things done, eschewing undue attention and avoiding show. Indeed, Bowers was almost unnaturally modest, a trait that was in part a consequence of his appearance. In his attitudes he was a patriot. ‘I love my country’, he once wrote, ‘and trust that I shall not be found wanting when the day comes to act.’ Above all he was a deeply religious man whose life was grounded in his faith”.

In his diary, Scott wrote of Bowers that “he is the hardest traveller that ever undertook a Polar journey as well as one of the most undaunted“. In a letter to Bower’s mother retrieved from the tent containing their bodies, Scott wrote “I write when we are very near the end of our journey, and I am finishing it in company with two gallant, noble gentlemen. One of these is your son. He had come be one of my closest and soundest friends, and I appreciate his wonderful upright nature, his ability and energy. As the troubles have thickened his dauntless spirit ever shone brighter and he has remained cheerful, hopeful, and indomitable to the end.”

The last words I leave to his companion on the ‘Worst Journey In The World’, Apsley  Cherry-Garrard

“As he was one of the two or three greatest friends of my life I find it hard to give the reader a mental picture of Birdie Bowers which will not appear extravagant.
There were times when his optimism appeared forced and formal, though I believe it was not really so; there were time when I have almost hated him for his infernal cheerfulness. To those accustomed to judge men by the standards of their fashionable and corseted drawing rooms Bowers appeared crude. ‘You couldn’t kill that man if you took a pole-axe to him’, was the comment of a New Zealander at a dance in Christchurch. Such men may be at a discount in conventional life; but give me a snowy ice-floe waving about on the top of a black swell, a ship thrown back, a sledge party almost shattered, or one that has just upset their supper on to the floor-cloth of the tent (which is much the same thing),  and I will lie down and cry for Bowers to come and lead me to food and safety………
There was nothing subtle about him. He was transparently simple, straightforward and unselfish. His capacity for work was prodigious, and when his own work happened to take less than his full-time he characteristically found activity in serving a scientist or exercising an animal……A living thing in trouble, be it a dog or a man, was something to be helped…..

For him difficulties simply did not exist: he was temperamentally one who refused to admit them.  Indeed if he did not actually welcome them he greeted them with scorn, and in scorning went far to master them……
I have never known a more buoyant, virile nature……
Those whom the gods love die young. The gods loved him, if indeed it be benevolent to show your favourites a clear, straight, shining path of life, with plenty of discomfort and not a little pain, but with few doubts and no fears.

Browning might well have had Bowers in mind when he wrote of:

One who never turned his back, but marched breast forward;
Never doubted clouds would break;
Never dreamed, though right was worsted, wrong would triumph;
Held we fall to rise, are baffled to fight better, Sleep to wake”. 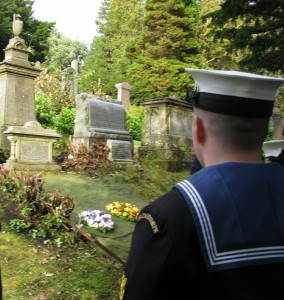