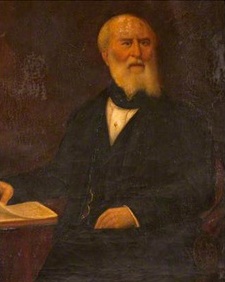 Born in Greenock on 2 August 1789 John was the eldest son of Alexander Dunlop of Keppoch. The Dunlop family is believed to be one of the most ancient in Scotland. His father was a banker and merchant.

Dunlop’s mother Janet died when he was about seven years of age, his father remarried the following year. He was educated at school in Greenock before attending Glasgow University in 1801. Having served an apprenticeship in Glasgow in 1809 he moved to Edinburgh.

It was in Edinburgh that he met and married his wife Janet with whom he had nine children. He was horrified by the effects alcohol abuse had on family life, on industry and the poverty surrounding it.

He set up the first British Temperance Society in Glasgow in 1829, within two years there were 44,000 members who had signed the pledge to abstain from alcohol. The first Society was formed in Greenock on 5th October 1829, on that day four people signed the pledge at Greenock. In Greenock Dunlop took an interest in local affairs, he was the first President of the Greenock Chamber of Commerce. Dunlop with his brother Robert was a great believer in education for all and supported a free school in Greenock. He was a religious man prone to introspection and depression which his father’s bankruptcy did little to alleviate. The family fortunes were restored by a legacy and Dunlop’s inheritance was safeguarded.

By 1833 Dunlop was working full time for the temperance cause. Inheriting the Gairbraid Estate, Glasgow in 1836 secured his financial future. Dunlop left Greenock in 1836, he settled in London from where he was able to carry out his temperance work nationwide. The expansion of the railway system made it easier for Dunlop to travel delivering his temperance message. In the beginning Dunlop did not advocate abstinence from all alcoholic drinks but believed in abstaining from spirits, this stance put him at odds with later established Temperance Societies, but later was in favour of total abstinence.

Alexander his half brother who was to become a prominent politician, both in church and state approached Dunlop about entering politics. Although a supporter of better living and working conditions for the poor he never stood for parliament. Dunlop died in London on 12 December 1868. He was buried in Paddington Old Cemetery and in 1905 a memorial was erected to him there.

As part of the  East End Advisory’s project “Did Your Grandpa Sign the Pledge?” story boards were made featuring John Dunlop – the Father of the British Temperance Movement – and his work and influence.  Below are 3 of them.  (To enlarge them click on the image) 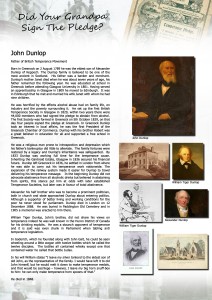 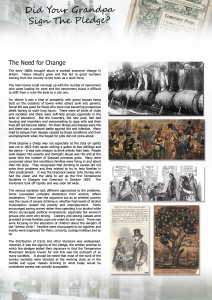