Muriel Ritson was born on the 8th July 1885 to John Fletcher Ritson and Agnes Jane Catto in Broomberry Drive, Gourock.  John and Agnes had married in Peterhead on the 6th June 1882.  Muriel was the middle child of the family, Ada, the eldest and Cecilia being the youngest.   The family was originally from the north of England but John’s father Thomas worked on the railways and eventually became station master at what was then called Cathcart Street Station, living at Hunter Villa, Gourock (he died in 1897, his wife Elizabeth dying in 1896).  His son John also became involved with work on the railway as a commission agent.

Muriel was educated at Greenock Academy and at a finishing school in Germany.  She told of how she valued being educated at a co-educational school, a value that she held on to in her working life trying to ensure that women were treated as equal to men in the work place.  She became a social worker and rent collector in Glasgow and becoming familiar with health issues.  This led to various prestigious appointments on ground breaking boards and committees as well as her work as assistant secretary and later Scottish Controller of the Ministry of National Insurance.  She was awarded the CBE in 1936.

Her most important appointment was as Scottish Representative on the Beveridge Committee representing the Department of Health – from which the National Health Service was formed. 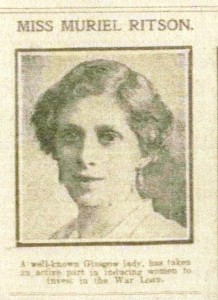 Muriel Ritson was a gifted and influential lady and she had style.  In the Greenock Times of 4 December 1942 there is a snippet saying she was regarded as the best-dressed woman in the civil service!