Posted by author2 on November 11, 2016 in Unsung Heroines

On January 17th 1886 Isabel Marion Mackintosh was born at 57 Newton Street Greenock.  Her parents were Jessie Victoria McKenzie and Archibald Robert Donald Mackintosh who had married in Edinburgh on August 30th 1882.  Marion’s parents came from the Nairn area but they seemed to have moved around quite often and in fact disappear from records shortly after Isabel’s birth.  Her father is described as an engineer on the birth certificate so it is possible that he could be working abroad or in the merchant navy.  In the 1891 census Isabel is shown as living with her step-grandparents Mary and Robert Anderson at Lochdhu in Nairn.

She trained as a nurse in London at the Prince of Wales Hospital and at the start of the First World War volunteered for service.  She served in France from November 1914 until 1916 working for the British and the French Red Cross.  When Isabel returned to England she served as Night Superintendant and later as a Sister in the Bermondsey Military Hospital from 1917 where she was known as “Sister Mac”.    For her work she was awarded the ARRC – a Red Cross award – and decorated by the King at Buckingham Palace on April 20th 1918.   Sadly she died shortly after this of pneumonia on July 10th.  She is buried in Nairn Cemetery.  Her name in the first one on the Nairnshire War Memorial. 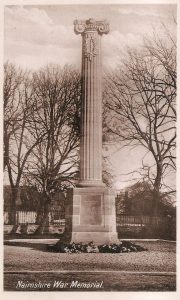 Recently (November 2015) her war medals came up for sale which seems a sad end to a very distinguished career.  There were 4 medals, the British Royal Red Cross (ARRC), 1914 Star, Victory and GVR. 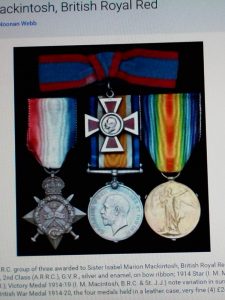