Posted by author2 on July 6, 2015 in Artists and Designers

Patrick Downie was born in Greenock in 1854.  He was the only son of Irish parents Peter Downie and Margaret Murray.  He was their youngest child and was baptised in St Mary’s, Greenock on 12 October 1854.  His sisters were Susan and Agnes.

Patrick always wanted to be an artist but family circumstances were such that he had to accept various employments before he could take his ambition further.  He worked as a labourer, a grocer’s assistant, a van driver and an auxiliary letter carrier to support his mother and at the same time sketching the local scenes.  He was eventually able to fulfil his ambition and train as an artist, spending some time doing so in Paris and from then devoted his life to his art.  After the death of his mother he left Greenock and lived in Paisley where he found many patrons to support him.  He married Maggie Cochran, the daughter of a local business man and former provost Robert Cochran -who was a talented amateur artist.  She sadly died in 1897.  He later married Helen Cochran, her sister ( who was also an accomplished artist).

Latterly he lived in Largs where he died in May 1945 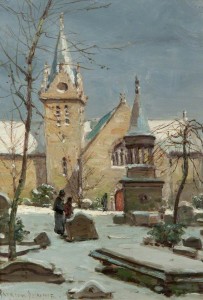 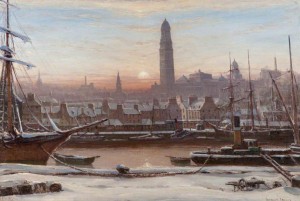 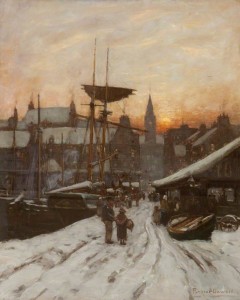 The life and times of “our” Patrick Downie is often confused in internet references and other places with another artist John Patrick Downie.  John Patrick was born in Glasgow in 1871 to James Downie and Isabella Patrick.  James was a cotton manufacturer.  John studied in London and in Paris.  His style of painting is quite different from Patrick’s.  He never married and he died in Glasgow on 4 April 1945.  He is buried in the Glasgow Necropolis.