Posted by author2 on November 23, 2012 in Artists and Designers 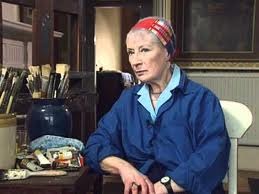 Elizabeth (Bet) Low ARSA RSW DLitt was born in Gourock on 28 December 1924.  From an early age she loved the sea and river views around where she lived.

Her talent as a landscape artist was recognised while she studied at Greenock Academy where she won the (Matthew) Rankin Prize For Art.

She studied at the Glasgow School of Art during the war years and from there attended the Hospital field College of Art in Arbroath.  She trained as a teacher at Jordanhill College, Glasgow.

While at Jordanhill she became friendly with the young Stanley Baxter and through him became involved in the Unity Theatre, a project in Glasgow which involved singers and actors as well as artists in its outreach to young people.  It was here that she met and married Tom McDonald. She had a son and a daughter.

Bet Low took part in an STV series called Talking Pictures in the early 1990s. She is in series 1, episode 4.