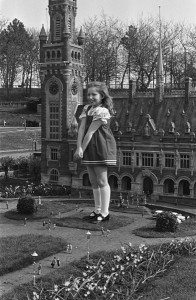 Lena Hilda Zavaroni (4 November 1963 – 1 October 1999) was a Scottish child singer and a television show host. With her album Ma! He’s Making Eyes at Me at ten years of age, she is the youngest person in history to have an album in the top ten of the UK Albums Chart. Later in life she hosted TV shows and appeared on stage. She died at the age of 35 after a long battle with anorexia nervosa.

Lena was born in Greenock and grew up in the small town of Rothesay on the Isle of Bute with musical parents, who owned a fish and chip shop. Father Victor Zavaroni played the guitar, mother Hilda sang, and Lena herself sang from the age of two. Her Italian surname came from her immigrant grandfather.

She was discovered in the summer of 1973 by record producer Tommy Scott, who was on holiday in Rothesay and heard her singing with her father and uncle in a band. Scott contacted impresario Phil Solomon, which led to his partner Dorothy Solomon’s becoming Zavaroni’s manager.

In 1974 Lena appeared on Opportunity Knocks hosted by Hughie Green and won the show for a record-breaking five weeks running. She followed this with the album Ma, a collection of classic and then-recent pop standards which reached number eight in the UK album chart. At 10 years, 146 days old, Zavaroni is still the youngest person to have an album in the Top 10 and was also the youngest person to appear on the BBC’s Top of the Pops.

Zavaroni also sang at a Hollywood charity show with Frank Sinatra and Lucille Ball in 1974, at which Ball commented, “You’re special. Very special and very, very good,” although some sources attribute the words to Sinatra. Following this, Zavaroni guest-starred on The Carol Burnett Show. She also appeared in The Morecambe and Wise Show, the 1976 Royal Variety Show and performed at the White House for US President Gerald Ford. Signed to the soul-oriented Stax Records label in the United States, Zavaroni did not make much of a chart impact Stateside despite the praise and television appearances, as her Ma album failed to chart and its title single made it only to number 91 on the Billboard Hot 100 during a four-week chart run in the summer of 1974.

Between 1979 and 1982, Lena had her own TV series on the BBC, Lena Zavaroni and Music, which featured singing and dancing, and included guests such as Spike Milligan, Elaine Stritch, and Les Dawson.

From the age of 13, Zavaroni suffered from anorexia nervosa. While at stage school, her weight dropped to 56 lb (4 stone or 25 kg). Zavaroni blamed this on the pressure placed upon her to fit into costumes while at the same time she was “developing as a woman.

She continued to suffer from anorexia throughout the 1980s, and in 1989 she married computer consultant Peter Wiltshire. The couple settled in north London but separated 18 months later. Also in 1989, Zavaroni’s mother, Hilda, died of a tranquilliser overdose and a fire destroyed all of her showbiz mementos.

After the breakup of her marriage, Zavaroni moved to Hoddesdon, Hertfordshire, to be nearer to her father and his second wife. By this time, she was living on state benefits and in 1999 was accused of stealing a 50p packet of jelly, although the charges were later dropped.

Zavaroni underwent a number of drug treatments and received electroconvulsive therapy in an attempt to beat her anorexia. Her inquest was told that none of these had been successful in the long term. In addition she was suffering from depression and begged doctors to operate on her to relieve her depression. Although the operation would not cure her anorexia, she was desperate for it to proceed and threatened suicide (she also took a drug overdose) if it did not.

In September 1999 Zavaroni was admitted to University Hospital of Wales in Cardiff for a psychosurgical operation. After the operation, she appeared to be in a satisfactory condition and after a week she was “making telephone calls, cheerful and engaging in conversation,” even asking her doctor if he thought there was any chance that she would get back on stage. However, three weeks after the operation, she developed a chest infection and died from pneumonia on 1 October 1999.