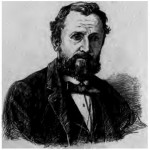 James Thomson was born in Port Glasgow to James Thomson and Sarah Kennedy on 23 November 1834.  James’ father, a merchant navy officer,  suffered a severe stroke which paralysed him in 1840 and 2 years later his mother died.  He was sent to London to be educated at the Royal Caledonian Asylum and then in 1850 to the Military Asylum, Chelsea where he qualified as a teacher.  His first posting was to Ballincollig near Cork.  It was here that he met the love of his life, Matilda Weller who tragically died in 1853.  It was thought that her death was the cause of much of his later problems with depression and dejection.  Here too he met the man who became very influential in his life and thinking, Charles Bradlough, who was by then a well-known free-thinker.  It was under his auspices, as editor of the London Investigator magazine, that Thomson published many of his poems.  Bradlough enabled him to find work in London after Thomson left the army and here he stayed until his death.

Bertram Dobell , a friend and admirer of Thomson helped him publish, what was to be his most well known poem, The City of Dreadful Night.  This poem came about because of his depression and alcoholism struggles.  It was well received by the critics and is still in print today. 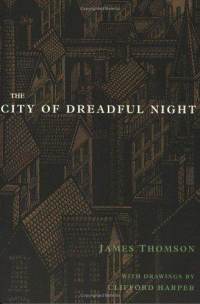 Thomson became homeless and tragically died i n University College Hospital in London on 3 June 1882 at the young age of 47.  In the index of Wills and Administration he left his estate of £55.10.7 to his only next of kin, his  brother John Parker Thomson, whose address was given as 113 Tipping Street, Ardwick, Manchester.