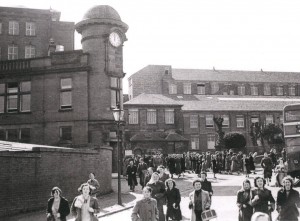 The Merino Mill was on the site at the top of Drumfrochar Road, known locally as the Mill Road, from 1840 till it finally closed in 1981.

The Merino Mill was the name popularly used for the premises owned by Fleming Reid and Co. whose founders were John Fleming and James Reid.

They built a small spinning mill in 1840 but it was not until 1890 that the mill began to spin wool from the Australian merino sheep.  The first large mill went on fire in1880 and while it was being rebuilt the business of the company was carried out in England.

The mill buildings were 220feet in length and 60 feet in breadth and occupied six storeys.  There were also knitting sheds, warehouses and washhouses.   Fleming Reid’s had an excellent reputation as spinners of carpet yarns and it later became well known for tweed yarns, as dress piece makers for Bradford and braid makers for Manchester.

Fleming Reid and Co. had 380 shops throughout the UK, in which their produce was sold, three of which were in Greenock.  They were known as the Scottish Wool and Hosiery Stores and one was in West Blackhall Street, one in Rue End Street and one near the mill itself in Drumfrochar Road.

James Reid was a conservative M.P. for Greenock from 1900 till 1906.  He was educated in Belfast and later became the Chairman of Fleming Reid and Co. Ltd. Worsted spinners and hosiery manufacturers of Greenock. 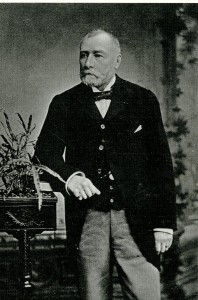 John Fleming of Fleming Reid’s Mill  was born in Glasgow in 1806 and died in Edinburgh on 5th February 1898.  He spent his early years in Glasgow but later moved to Greenock where he came to join the woollen and worsted manufacturers in Drumfrochar Road.  This mill later became known as Fleming Reid’s and was referred to locally as the Merino Mill because wool from the merino sheep was imported from Australia to manufacture many of the woollen goods.

John was an active man of business and much of his energy and ability were spent in running Fleming Reid’s with his business partner James Reid. John’s younger brother, Alexander , and James Reid’s nephew, also James Reid, later joined the firm and ran it successfully for many years.

In the late 1850’s and early 1860’s he entered public life as a Town Councillor and served on the Council for about fifteen years. During this time he became a Magistrate.

John Fleming was a Free Churchman for many years.  He was an elder of Dr. Bonar’s congregation and was greatly involved with Crawfurdsburn Free Church and always took a great interest in its welfare.

In later life he retired to Edinburgh where he was always happy to welcome his Greenock friends. He passed away peacefully at his home in Magdala Crescent in Edinburgh.