Posted by author2 on June 8, 2012 in Artists and Designers

The artist Stanley Spencer was appointed as official war artist during the Second World War to Lithgow’s Kingston Yard at Port Glasgow. He lodged at various places in that area over the war year while he undertook his work and produced a huge painting depicting the various trades involved in ship building a tribute to the men of the Clyde.  This is held in the Imperial War Museum. He also sketched as he wandered around the area to and fro to the yards and there are several other paintings and drawings of the area carried out during the war years.  These are well documented on various website.

He returned to Port Glasgow in the 1940s and 1950s as he had become fascinated by the Port Glasgow Cemetery and its setting on the hillside overlooking the Clyde.  He had an idea of producing a work similar in scale to the war time one.  Although this did not come to fruitition he carried out a whole series of paintings at the cemetery – which became his Mount Zion – using local people as models for some of the figures and called it the Resurrection series.  These paintings sadly became separated and are now in various art galleries around the country.  Again these are shown on several websites. 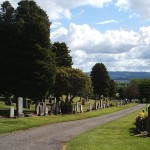 A few of the many lodgings Spencer stayed in while working in Port Glasgow. 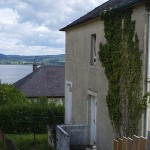 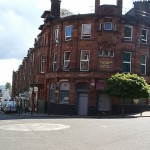 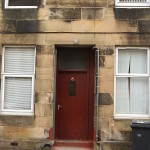 Walking to and from the yard also provided the inspiration for some of his other works. 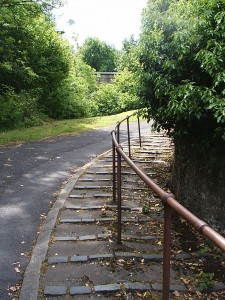 Walking from Devol Avenue down the Glen provided him with the idea of the scene of children playing on the railings (in the Kelvingrove Art Gallery and Museum, Glasgow); early morning walks were also the inspiration of several of his paintings of general views looking over the river.

Near to the new B&Q store in Port Glasgow a sculpture has been erected in tribute to his war time work in the yards.  The store is on the site of the yard where he sketched and planned his great war time tribute to the men of the Clyde. 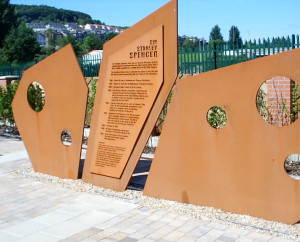 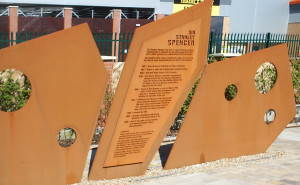 ← Alison Watt
Ian McCrorie – A Life Lived to the Full →