Posted by author2 on February 14, 2019 in Local Connections 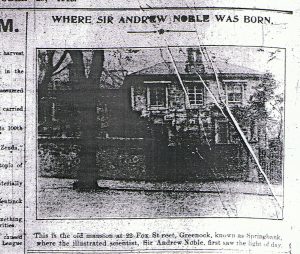 Andrew Noble was born in Greenock at 22 Fox Street.   His parents were George Noble and Geils Moore Donald.  George was at that time a Lieutenant in the Royal Navy.  Andrew was born on 13th September 1831 and baptised in the Old West Kirk on 11th October of that year.  He was one of a large family – in the 1841 census one of 10 children.  The address at that time was 44 Union Street, Greenock.  Educated locally and then attended Edinburgh Academy and later the Royal Military Academy, Woolwich.  He was commissioned as an officer in the Royal Artillery in 1855.

As a physicist he became renowned internationally for his work on ballistics and gunnery, receiving many honours and accolades for his work, being made a baronet in 1902.  There is much on the internet giving full details of his work and achievements.  In particular

this includes photographs of a very distinguished looking Victorian gentleman.

He met and married Margery Durham Campbell (who lived to be 101) while stationed in Quebec in 1854 and had 4 sons and 2 daughters, .  His family too had distinguished careers.  George then Saxton became 2nd and 3rd baronet;  John was made a baronet in his own right in 1923.  Also daughters Lilias and Ethel and the youngest son, Philip

He died at his Scottish estate at Ardkinglas, Argyll on 22nd October 1915.