On his father’s death in 1805  Robert inherited plantations in Jamaica and the Kelly Estate in the west of Scotland. He was elected as the first MP for Greenock in 1832  but resigned in 1845 when he got into financial difficulties. He was Chairman of the committee which recommended the Penny Postage Scheme to Parliament.

He was the senior partner in Wallace Hunter & Co. who were West India merchants.

After the Abolition of Slavery Wallace was awarded approximately £11015 in slave compensation, he was the owner of 549 slaves on his Jamaican Plantations. The Slave Apprenticeship System meant that “freed” slaves still worked for their old owners for up to 8 years on very low wages.

“Mr Wallace property, worse than any property in the parish, every property better than we,”

Sturge and Harvey stated that ” We are quite willing to believe that the proprietor of this estate has been kept in ignorance of the treatment of his negroes; and it is not without great regret, that we bring these facts under his notice and that of the public in the present manner, but we are strongly impressed with the conviction, that there are no estates more oppressively or even cruelly managed, than those of many liberal, humane and even religious proprietors resident in England.”

Robert Wallace sold the Kelly Estate and retired to Seafield Cottage, a public subscription was raised for him which provided him with an annuity of £500.  He died at Seafield Cottage on 1st April 1855. It was his wish to be buried overlooking Greenock, his memorial can be found in Section V of Greenock Cemetery. 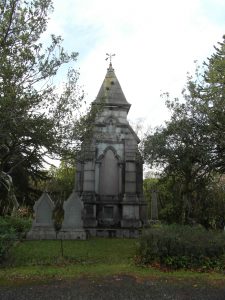