Posted by author2 on October 17, 2016 in Local Connections

Private Thomas Ramsay Savage is buried in Greenock Cemetery (section HHH420).  He was injured at the Battle of the Somme and brought to the Northern General Hospital in Newcastle where he died of his wounds on 5th October 1916.  He is the only soldier buried in the Inverclyde area who took part in the battle.  There are many others remembered on family stones in local cemeteries but their graves – if any – are elsewhere.

Thomas was born in Greenock in 1890 at Wellington Street.  He had 5 older siblings – all girls, Margaret, Mary, Jane, Janet and Marion.  His parents Thomas and Marion came from Largs and the 4 older girls were born there.  What brought the family to Greenock is not known but as Thomas senior is described as a tailor and clothier perhaps to further his business.  Thomas attended Greenock High School and his name is on their war memorial (now in store in Inverclyde Academy).  He is also named in the Men of Greenock book and is on the amazing tapestry in the McLean Museum called “Too Many Names”. 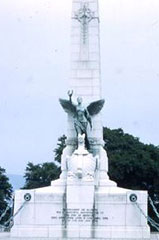 Thomas’ name on the tapestry

Thomas was with the family in later censuses until 1911 but at some point after this moved to Stroud Green in the London area as he was a traveller for the local Greenock company of Fleming Reid.  It was from this address that he enlisted in the army joining the London Scottish Battalion of the London Regiment.

At the time of his death the family were living at Robertson Street, Greenock and it was from this address that the cortege left on Saturday 7th October on the way to the cemetery.  The Greenock Telegraph of the 9th October tells that he was buried with full military honours and goes on to say: “Preceded by a firing party and pipe band from the Royal Scots Fuseliers, the cortege attracted much sympathetic attention, the roadway from the house at 16 Robertson Street to the cemetery being lined with on-lookers.” 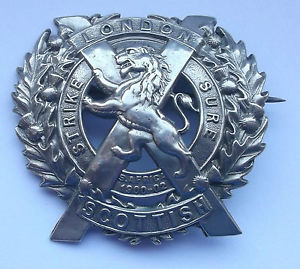 East End Advisory took part in the Commonwealth War Graves Commission project called Living Memories.  This project aimed to encourage local people to find out more about the men and women who were buried locally who had taken part in the Battle of the Somme and to ensure they were not forgotten.  As our part in the project we also tried to find names on family graves stones in some of our local cemeteries of those who had lost their lives in that battle, to place a poppy on the stones as well as photograph them and put them on our facebook page ( https://www.facebook.com/Inverclyde-Heritage).  We also entered the names of those local men who died at the Somme on the British Legion project website called Every Man Remembered. (www.evermanremembered.org)  The Mclean Museum website for the Great War has lots of information. (http://www.inverclydeww1.org/)  We are now the proud recipients of the CWGC Champion certificate for our work. 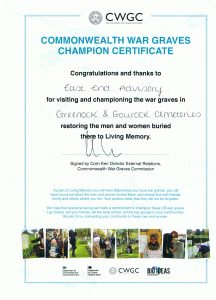