Posted by author2 on September 7, 2012 in Local History & Heritage

In 1589 a Royal Charter was signed at Holyrood by King James VI giving permission for John Schaw, a local laird to build a church – and maintain it – for the people of Greenock – then a small fishing village.  Prior to this the Greenock people had to walk to Inverkip to attend church.

The church was built on the waterside on the banks of the West Burn and opened for worship in 1591.  Over the years it expanded as the population grew.  In 1920s the church was demolished and rebuilt on the Seafield site by Harland and Wolf.  They had bought Cairds the shipbuilders and wanted to expand.  However, the church building was blocking any expansion and it was agreed that if Harland and Wolf would pay to have the church relocated.  It reopened in 1928. 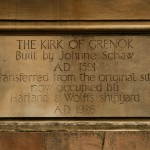 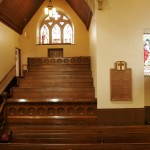 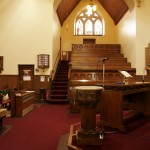 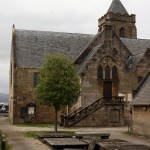 For 200 years  the graveyard had been the only burial place for Greenock and this too had to be cleared to allow for the expansion.  James Watt’s family and Highland Mary – Mary Campbell – were among those who had been buried in the churchyard and they were re-intered in the Greenock Cemetery.

all photographs copyright David I. Mackinnon