Posted by author2 on August 2, 2013 in Local Connections 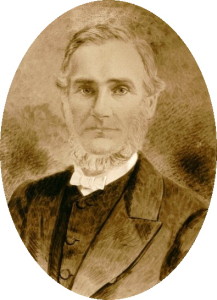 Kerr Johnston was born in Greenock on 26 August 1812, his father was a printer and publisher.  Kerr joined his father’s business and learned bookbinding.  He studied at Glasgow University between 1837 -1840 and later studied at Glasgow Theological Academy.   Dr Ralph Wardlaw, his tutor, was a prominent Scottish opponent of religious establishments.  Kerr supported himself through university by working at his trade.  He was a member of the George Square Congregational Church in Greenock. After his ordination in 1842 he became minister of Mill Street Congregational Church in Perth. He married Eliza Gowan in 1842 in the parish church in Berwick on Tweed, she was a shipbuilders daughter.  He was baptised for a second time in 1848 by Robert, his Baptist minister brother, as he doubted the validity of baptizing children.  In 1849 he became the pastor of Bethel Baptist Church in Shipley, Yorkshire.

Kerr moved to Australia in1852 with his wife and seven children, he arrived in Van Diemen’s Land and took part in the unsuccessful campaign against state aid to religion. He was an active member of the temperance movement and the Bible Society.  Kerr’s main interest was the Hobart Bethel Union Seamen’s Mission, he left Hobart in 1857.  In Melbourne, with the help of others , he set up a seaman’s mission,the Victorian Bethel Union.  A  floating Bethel in the form of an old American clipper was used as the mission.  It was painted yellow with Bethel Sailors Church painted on either side, a chapel was also created in the hold.  Kerr and his family lived on the vessel for a number of years.

The official opening of the seamen’s mission on the Bethel ship was on the 1st July 1857.  The Victorian Seamen’s Mission became land based in 1860, a boatshed was used as a temporary chapel.  In November the Mariners’ Church was opened.  Kerr like his Greenock counterpart Captain Donald Brotchie  distributed Books and Bibles and temperance sermons to visiting ships.

Kerr worked tirelessly for the seamens mission and retired in 1885 he died on 9 October 1887 and was buried in Melbourne General Cemetery. 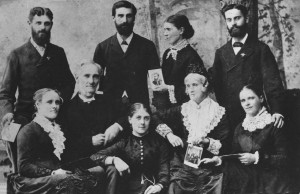 The Johnston family in 1883