There can be little doubt that James Watt is Greenock’s most famous son. He was born in William Street not far from his statue and just around the corner from the pub named in his honour, The James Watt Bar, now known, by the descendants of those who knew him personally, as the ‘Jimmy Watt’. 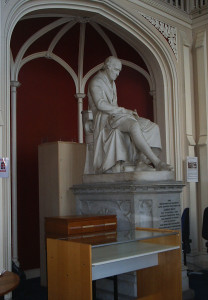 The local college of further education, the James Watt College, is named after him. So is the Watt Library in Union Street which houses the local history archives relating to Inverclyde. There is also Watt Street, a favourite for driving test examiners – the cambers in the road making the three point turn particularly awkward.

Watt will be forever associated though with watching a kettle boil and formulating a few great scientific ideas while drinking his tea. He also has his name on lightbulbs.

The following link leads to a page hosted on Inverclyde Council’s website..
http://www.inverclyde.gov.uk/community-life-and-leisure/local-history-and-heritage/copying-james-watt