Posted by author2 on October 23, 2015 in Local Connections

James Moffat was the youngest child of James Moffat and Mary Bell.  He was born in Carnwath, Lanarkshire on 10th August 1818.  He came to Port Glasgow with his widowed sister Mary Lees and niece Catherine some time prior to the 1841 census, where he is shown as a grocer.  He worked at the grocer’s shop in Hill Street, Greenock.  He later set up business for himself in Fore Street, in the premises which were part of the Town Buildings, Port Glasgow.

He lived first of all at Scotts Lane, Port Glasgow and by the 1871 census he had moved to West Vale, 64, Glen Avenue, Port Glasgow.  He  described himself as a self-made man and soon established himself as a master grocer and wine merchant.  This somewhat underestimates his work and businesses as he also invested in shipping and could bring his wine supplies direct to the Port.  He also amassed a great deal of wealth by wisely investing in property locally.  He was interested in affairs connected to the Harbour and was for many years a member of the Harbour Trust.  He was also a Town Councillor. 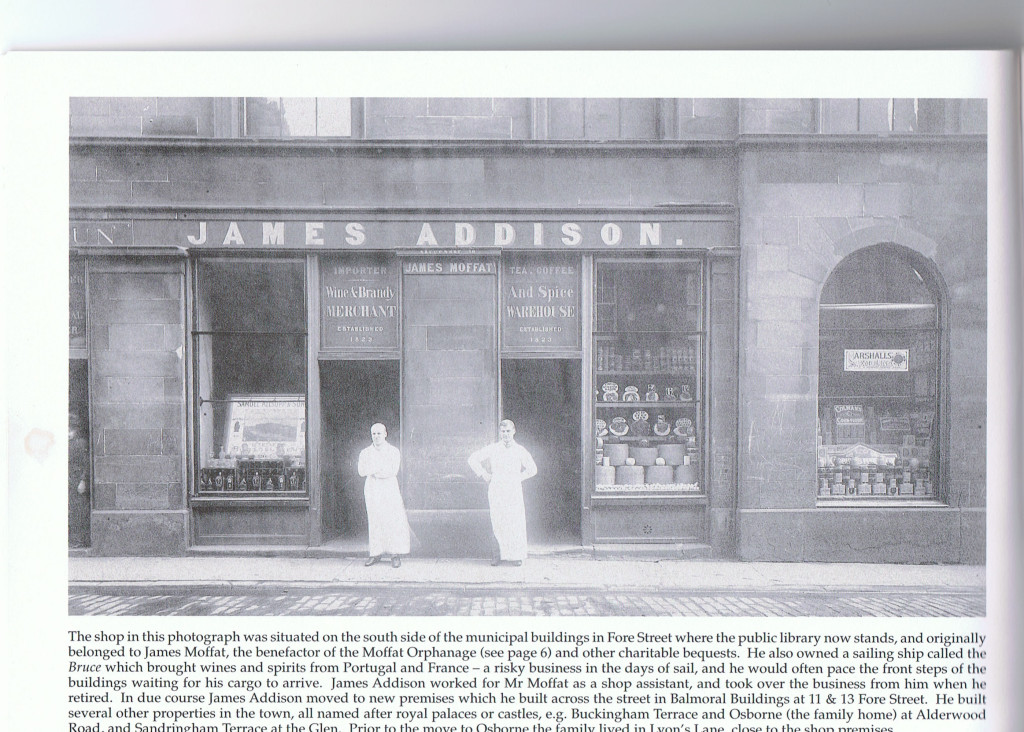 He sold his grocer’s business in his latter years to his friend and colleague James Addison.  It was James Addison who registered his friend’s death on 16th February 1884.  The poem which was published shortly after his death tells of his life and work – see below.

In his will, as well as caring for family members, he left many bequests to his adopted home town.  There was a bequest for a library to be set up for the Port and the residue of his estate – which was considerable – was to build an orphanage, later known as Carnegie Park.

Lines on the Death of Mr James Moffat, Port Glasgow

(By the author of “The Boggle Stone” etc.)

Grim death has at last dealt the fatal buffet,  And sent to his long rest poor James Moffat;

His day is done, now all is endless night –  Six feet of earth have shut him out of sight.

The dreaded grave, which everyone must share,  No dreams nor visions will, disturb him there –

Nor joy, nor sorrow, nor ambitious strife,  And all the hollow mockeries of life, –

Free from the fears that trouble every creature,  And all the ills that shock their better nature.

James was a patient, prudent, business man,  And guided by the good old simple plan;

With power to make, and happy knack of keeping,  He richer grew while wiser folks were sleeping,

And steadily he added to his store  By making what he made make something more.

He squandered not, but kept his wealth in order,  Although he was not what we call a hoarder;

Long years ago, he founded the generous plan  To aid and elevate his fellow-man.

An Orphanage he had long contemplated,  And by his will the thought is consummated;

And what Port Glasgow stood in greatest need –   A library, for those inclined to read.

If these bequests are properly expended,  They may turn out the blessing he intended.

But, to resume, he led a single life,  For, lucky man, he never had a wife!

Yet, no one ever thought he was deficient  In that which makes a married man efficient.

Whether or not, this we can say at least,  He lived as celibate as any priest,

And many times have acted the confessor –   On easy terms let off a frail transgressor;

And sure am I no priest at a confession  Could sympathise or act with more discretion,

For he was not a carnal-minded man,  Whose baser instinct modestly out ran;

Nor yet like some who every chance will fly at,  For all he did was done so very quiet.

A kind, good-natured soul, but somewhat wheezy,  And very much inclined to take things easy,

He shunned all wrangling and polemic strife,  And live a modest, unobtrusive life.

Moses was meek, and Moffat was meeker,  But not so able a public speaker;

Although he could at times enforce a truth,  And clinch it with the monosyll’c “ough”.

Nature for all his faults made recompense  By blessing him with good, sound common sense.

Pious he was, and strict in his devotions,  And yet he held no superstitious notions;

But like most men who, gifted with great minds,  Has strong belief in spirits of all kinds.

We all have heard of Jacob’s wrestling feat,  Well, Moffat tried the spirits, and was beat –

Not once, nor twice, nor thrice, in sooth to tell,  As often as he tried as often he fell;

And yet, like Jacob, he would not let go,  But still kept struggling with his subtle foe.

For long he fought, and though he weaker grew,  The unequal conflict he would still renew.

Sore wounded whiles, he high resolve kept forming,  When Jacoblike, he halted in the morning,

And then at times becoming sore afraid,  Would summons some disciples to his aid.

The weapon that he used was ”mountain dew”,  And none gave in until they were ”blin fou”.

The strong ones fought as long as they were able,  The weak ones till they fell beneath the table.

Just to illustrate, let us now presume  That spirit worship was within a room,

Or some snug spot remote from prying eye,  Where men and spirits meet their strength to try,

Like other sects, they offered their libations,  At stated time they held their convocations –

A plural god was their divinity,  With many names, but one in unity –

No other godship holds such potent sway,  Or subjects who so willingly obey;

Yet strange to say, the homage that they do  This jolly god they always sadly rue,

And still with lessons all so dearly bought,  Lie down before the monster Juggernaut.

So often ‘mong the wheels poor Jamie fell,  The wonder is that he escaped so well;

Like many others, thinking danger past,  Till, unsuspecting, they are caught at last.

His time was come, and he has gone the way  That everyone must go, live as they may,

Here let me close these lines with “resquiescat”,  Or peaceful be the rest of James Moffat.