Posted by author2 on February 12, 2019 in Unsung Heroines

Helen was born on 15th November 1926 the elder of 2 girls.  Educated in Greenock and went on to study chemistry at Glasgow University.  After being awarded a BSc she continued her studies for a PhD in Electrochemistry.  When these studies were completed she received a research fellowship in Canada staying there for 3 years.  Meantime she became involved with the Federation of University Women and this became a life long commitment.

After a spell back home when she trained as a teacher she was invited to do research work in Sweden staying there for 3 years.  However, Helen was very much a home person and wanted to return to Scotland.  She became a lecturer at her home University in the Chemistry Department and was also a warden  in the halls of residence.  She became senior lecturer and a senior advisor of studies supervising research students.  Helen also served on the Faculty Committee and was elected to the Senate.  Helen became a Fellow of the Royal Society of Chemistry and a Chartered Chemist.  Officially retiring from the University in 1983 she continued in part time employment until 1986.  At this point she was co-opted by the Secretary of State to become a Governor of Paisley College of Technology and was Convener of the Student Affairs Committee.  When the College became a University she became a member of the Court until 1996. In 1997 Helen became a Doctor of Paisley University.  The same year she she was awarded and OBE for services to education.

In her younger days she was involved with the Girl Guides becoming a captain. She was a trained teacher of Scottish country dancing, and interest that served her well in the many countries she visited.  She was a strong member of her local church, the Old West Kirk in Greenock serving as chair of the Congregational Board. A voluntary driver for the local hospice for many years; was appointed to the Children’s Panel Advisory Committee, chairing it from 1991 – 1995; a member of the local bowling club. 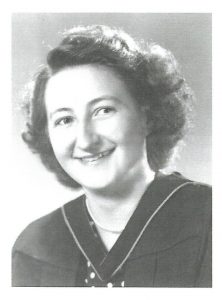 Died 6th January 2019.  A remarkable and distinguished life lived quietly among us.