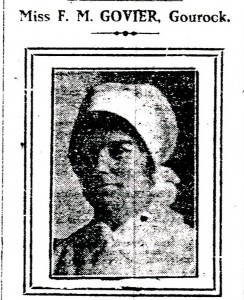 Miss Flossie M. Govier was mentioned by the War Office for special services rendered during World War 1.  She served as a nurse in Red Cross and VAD Hospitals in the country.  Flossie worked at the Smithston War Hospital prior to serving at the Northumberland Auxiliary Hospital, Corbridge-on-Tyne.  Her address is given as 3 Mona Terrace, Royal Street, Gourock .

The 1891 census shows that Flossie Govier was born in Wigtownshire in 1888, the eldest daughter of Albert and Anna Govier and her father was serving as a coast guard in Kildonan, Bute.  In the 1901 census the family are living in Gourock and Albert is now a customs watcher.

Prior to his coastguard service Flossie’s father, Albert, served in the Royal Navy and was awarded the Khedive’s Star, Sudan and good conduct and long service medals.  He took part in the Kharoum Relief Expedition which set out belatedly to rescue General Gordon.  They arrived on 28th September 1885 but found Gordon had been executed 2 days previously.