Ernest trained as a designer/engineer with Scott and Co. in Glasgow and worked as a draughtsman with the company until 1898.  In 1897 he met his future wife Jessie Marion King when they moved in to the same apartment block  in Glasgow.  He began to study part time at the Glasgow School of Art where Jessie was already a full time student and in 1903 he was appointed as a part time lecturer at the GSA.  Meanwhile he had begun working for the furniture company of Wylie and Lochhead and became their chief designer on the art furniture department ( see also the item on George Logan). 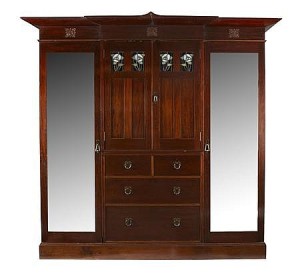 Design for Wylie and Lochhead

In 1906 he moved to Manchester to work for George Wragge Ltd and was particularly involved in designs for stained glass windows. 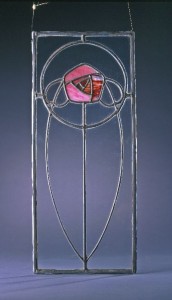 In 1908 he married Jessie and the following year their only child, a daughter Merle Elspeth, was born.  Shortly after this the couple moved to Paris and eventually set up their own art school in their home, the Shealing Atelier.  In the summer months the couple held summer schools in Arran.

At the outbreak of the 1st World War the couple returned to Scotland and set up home in Jessie’s house in Kircudbright and became part of the artist colony on the town. 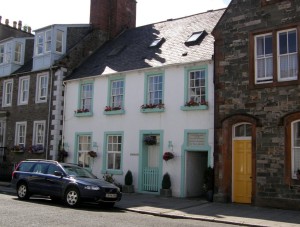 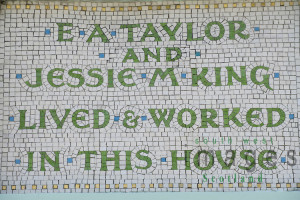 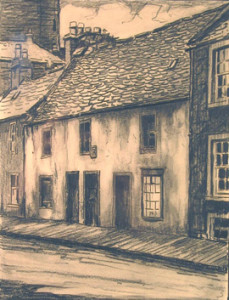 Ernest’s painting of their home in Kirkcudbright

The Taylors kept on their flat in Paris as Ernest worked for the prestigious art journal the Studio as the Paris correspondent.

Ernest was a man of many talents for as well as furniture and  stained glass design he worked with oil and water colours in a style close to the colourists and is know for his fine landscapes of local areas. 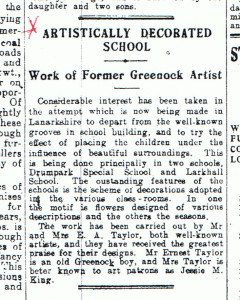 He continued teaching at the Arran summer schools and lectured and wrote many articles on art topics and played a major role in the local art scene. Jessie died in 1949 and Ernest in November 1951. 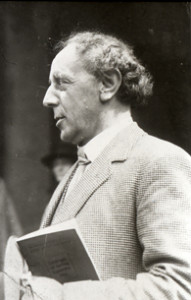 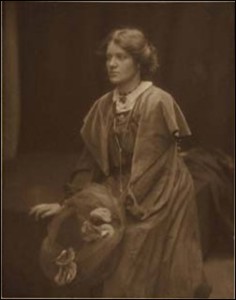